We open with an ultra sound of twins in the womb. One appears to be in distress. Then it cuts to a young lady fixing herself in the bathroom mirror. She has a very silent breakfast with her parents in a house that looks like the one I saw in the trailer for #Horror (2015). (Since I’m on a middle school horror kick I should check that movie out next.)

She walks out the door, lights a cigarette and gets on the school bus with her friend. Then she gets on the bus and a student puts his leg across the seat so she can’t sit down. I like this sequence because it straight forward shows us what her life is like.

Shout out to the people who have had to kick some jerks leg out-of-the-way to sit on the bus every morning. If you are going through that now, take solace in the fact the kid who is doing this to you will be arrested in the future for leaving their baby in the car in the winter. At least that’s what happened the one that did that to me. Just trifling.

This illustrated so well the isolation some people feel in school. The girl that I assumed was her friend at the beginning only spoke to her when they were alone but around the other kids she sort of acted like she didn’t know her. Walking behind her in the hall giggling with the other girls possibly about her. Those types of people exist. They suck. 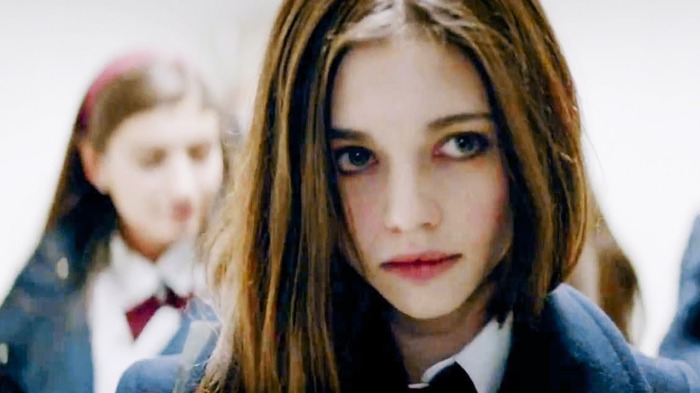 Then it is revealed that she is a senior and nearly 18. I though she was a freshman or sophomore. The one thing I regret from my senior year was that I didn’t tell more people to kiss my ass. If you are in high school and a senior if there is someone you need to tell off. Go the fuck off.

Unless it’s a teacher, if your teacher is an a-hole, they’ve most likely been one for 20 years and there isn’t anything you can say to change that.

It sucks that you can’t fight in school because everyone’s record is on digital files and some schools call the police and have kids catching assault charges for school yard fights. At the same time, who the fuck is still bullying in their senior year. That was weird too.

Anyway, I really like how this movie makes use of mirrors. Mirrors can be creepy. There are even superstitions about looking into your own eyes too long in a mirror.

No one’s bathroom is this dark, with the lights on.

Side note: She has the darkest bathroom ever. Also this has been filmed using a very blue camera gel (or had a blue filter applied in post production editing). I am not a fan of this look.

It turns out her father is a cosmetic surgeon. I laughed to myself when the receptionist said that she wished that she was in high school again. Nah, college was so much better. Grad school was even better. I had a ball in grad school.

I mean seriously. Who’s bathroom is this dark?

Back to the movie. At points her mirror image was saying things that those of us that have battled depression say to ourselves. Even the recounting of sad moments from the past.

This movie was more emotional than I anticipated. Just when she thought her father understood her, he revealed the most misguided birthday gift ever. I felt so bad for her in that moment. That was the exact opposite of what she needed from him.

The tone of this movie was reminded me of something else and at first I couldn’t put my finger on it. Until the scene at the Winter Prom Ice Skating Formal. It’s Carrie (1976). This movie took about 40 minutes showing you what Maria’s life was like and the ostracizing she endures, so that you understand why she does what she does.

Then as the altar takes over she was giving me, what if The Bad Seed (1956) was a teenager who was also a little bit like Poison Ivy (1992). Remember that movie? I haven’t seen that since it used to come on Showtime all the time when I was in high school. I need to rewatch that one as an adult.

Anyway this movie get’s pretty weird for a moment at the end. Like, The Strange Thing About The Johnsons (2011) weird. Then it reels it back and explains itself.

I enjoyed this more than some movies that had theatrical releases this past year. The actress did an awesome job of portraying the twins. This horror thriller is kind of like a Grim’s Fairytale fable but also would fit in well with movies like A Tale of Two Sisters (2003) and in a way, Basket Case (1982). If you like movies with those types of themes than you might like Look Away.