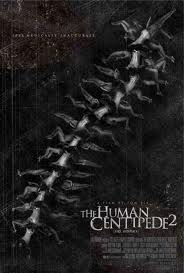 I saw the original The Human Centipede and found it mildly enjoyable, mostly because of Deiter Laser’s (best name ever for an actor) portrayal of Dr. Heiter. How fitting that the evil doctor’s name sounds like “hater” in English! With that said, The Human Centipede is the type of movie you watch once just to say you’ve seen it, like Salo. The Human Centipede 2 is an exercise in movie masochism.

There were so many times that I wanted to fast forward through this movie. It was trying to build tension, but instead it built boredom. It started out halfway promising with a look into the twisted mind of the main character Martin and his obsession with the movie The Human Centipede. Director Tom Six did everything in his power to make Martin the most repulsive, repugnant, revolting (whatever other words that start with RE that allude to what a disgusting person he is)  human being on film. You could almost smell Martin. Thank goodness this was not filmed in smellovision.


The look and feel of this film is completely different from the original. This would be no problem, if he wasn’t trying so desperately to be David Lynch. The choice of black and white, the long meandering scenes, and the industrial soundtrack are all a love letter to Erasurehead in my opinion. Yet, that all seemed out-of-place in this movie because Erasurehead had an under current of social commentary on pollution, isolation, and taking on adult responsibilities, whereas this is a social commentary on…….what exactly? Um. Yeah.

So let’s get to nitty-gritty. Martin is pretty ƒu¢ked in the head. He wants to make a full on human centipede, so he goes about assaulting and collecting people, that he keeps in an empty warehouse until he has the number he wants to perform the operation. Operation, meaning duct tape and staple gunning them together. Even though the practical effects for the movie are pretty solid, the operation scene goes on way too long and tests my patience. (Tom Six needs a new editor.) Then comes the thing Martin has been waiting for, which I call the doodoo train. (Try and think of a better name for it).

It falls flat without Dr. Heiter there to scream “Feed her! Feed her!” This is the one scene that is not in strictly black and white. There is plenty of brown, splattered on faces, splattered on the camera, and splattered on the wall. (If this scene was in 3-D I would have lost my lunch.) This turns on Martin even more than the time he was watching the scene from the original movie and decided to pleasure himself with sand paper (yes this actually happens in this movie). So what does Martin do? Well, apparently he made a human centipede so that he could get on the end of it and ƒu¢k it. Yep. He just wanted to ƒu¢k it, because he promptly tries to kill it soon after. That’s it.

Well, a pregnant lady gets away, and gives birth to a baby in a car, she then smashes the baby’s head under the gas pedal getting away. Oh and Martin ends up with a real centipede up his @$$. There, I just saved you 88 minutes of your, wait that was only 88 minutes? It felt like 3 hours! Anyway, you don’t have to waste your time on this crap fest (pun intended) at all. This is the most repulsive movie I have ever watched. (No, I have not seen Serbian Film yet, so for now this takes the cake.) According to IMDb there is going to be  “The Human Centipede III (Final Sequence)” in 2013. It’s current status is “in preproduction”. Let’s hope they find a way to bring Dr. Heiter back or maybe give him a mad scientist daughter.

ETA: Just in case this movie wasn’t sick enough, for ya. In the unedited version, Martin wraps barbed wire around his penis before raping the end of the human centipede. I had assumed the front of him was covered in fecal matter when he chased the pregnant woman out the door, but apparently that was also blood. It’s hard to tell the difference in black in white. This scene was one of the reasons this movie was banned in the U.K. until it was re-edited.

ETA again: I have now seen Serbian Film, and this is still worse. The subject matter was more controversial in Serbian film, but for some reason I didn’t have the same strong reaction to SF that I had to Human Centipede 2. Maybe that’s saying something about me. Don’t judge me. ^_^