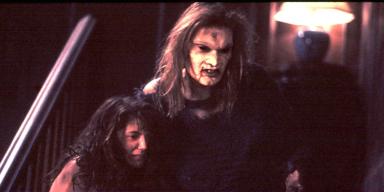 Last night Chiller played “Return of the Living Dead”, again! I’m not mad at them, because no matter how many times I see this movie, it never gets old. It’s fun horror. Fun Horror is a term I use to describe horror movies that aren’t particularly scary, but still enjoyable to watch. I’m talking about the kind of movies that are OK to watch alone, but really fun to watch with other people.  Some of these movies were not critical successes, and some weren’t even commercially successful, but still have a following. They usually are replayed on cable stations like AMC, TNT, Syfy, or Chiller.
Whenever these movies come on, people tweet like crazy! Twitter is like never being alone, so it’s kind of like watching a movie with the closest friends you’ve never met. I devised this list using the totally scientific method of level of mentions on twitter.
10. The People Under the Stairs
This is the most underrated Wes Craven movie. The writing is like a modern day fairy tale and the dialog is clever. I like the make-up on the boys in the basement.
9. Jeepers Creepers
According to IMDb the creature is named the Creeper, but everyone on Twitter affectionately calls him the Jeeper Creeper.
8. Night of the Creeps
I really believe this could easily be higher on my list, but it needs to get more airplay.  I know most of us have DVDs and/or Netflix and can watch movies whenever, but there is something nostalgic about the Friday Night Fright horror movie (I miss movie hosts like Elvira, Joe Bob Brigs, Dr. Atomic etc.), or Saturday afternoon (Remember Commander USA’s Groovy Movies?)
7. Child’s Play
This falls under the so bad it’s good category. First we have a child actor who has been instructed to do a horrible impression of a toddler.  There is actually a Twitition (Twitter Petition to remake this movie)
6. Wishmaster
This movie has inspired IMDb threads like, “Pinhead vs. Djinn”, and “Vote for Djinn in the Tournament of Terror.” It features horror alumni Robert Englund, Tony Todd, Kane Hodder, Reggie Bannister, Ted Raimi, and is narrated by Angus Scrimm! Plus, the way Andrew Divot delivers the line, “Make your wishezzzzzz!” is classic.
5. Jeepers Creepers 2
The thinly veiled homo-erotocism of this movie is too funny. As a woman I was pleased to see some male eye-candy for once.  The only other film I can think of that used men in a way that most horror movies use women is “Leeches”. (I note that the directors for both of these movies are gay, but still they’re giving us ladies something to look at.)
4. Shocker
Peter Berg’s “acting” and his character Jonathan fighting Horace Pinker through TV shows were the best parts, along with Pinker’s one-liners.
3. Fright Night
Let’s take a collective moment of silence for the remake Hollyweird is currently making.  When the remake hits theaters, let’s all agree to watch the original on Netflix or DVD and have a Twittest (twitter protest. OK so I made that up, but we can make it happen.) “You’re so cool Brewster!”
2. Return of the Living Dead
Like I said this movie never gets old. The soundtrack is excellent. I like the group of punk kids, the dialog, and most of all Tarman! “You think this is a fu¢kin costume? This is a way of life.”
1. Creepshow
Best Horror anthology ever! Viveca Lindfors should have gotten an Oscar for her portrayal of Aunt Bedelia!.  I can recite her whole graveyard scene. Stephen King as Jordy Verrill, and Adrienne Barbeau in “The Crate” are also quote worthy to this day!